What Is The Salary of an NBA Referee?

One might think that the toughest job in any sport belongs to the players, who not only drive the team forward in the games but also draw the passion of the fans which ultimately turns the sport into a business. While that may be true, the referee’s job is no less hectic.

Referees have to ensure a fair game while being heckled constantly by the crowd should the referee’s decision contradict the crowd’s opinion. NBA Referees have it extra tough because the closed nature of the basketball court makes the jeering quite audible.

But in addition to a sound ethical mind, referees have to be incredibly fit physically, in order to endure the toll a season can take on their bodies. Referees are expected to run across the court for 48 minutes straight, and unlike the players, are offered no breaks in between or the luxury to occupy a certain section of the court.

They diligently have to follow the ball wherever it goes across the court for the entirety of the game, while keeping a keen eye on all the players so as not to miss a foul. This ability to meet both the mental and physical demands of this job is truly a commendable feat. So does the NBA referee salary meet the demanding nature of the job?

The average NBA Referee salary can fall anywhere in the range of $180,000 to $500,000 a year. “>So why is there such a wide range in the average salary of NBA ref? The NBA Referee’s salary varies according to the job distinction as well as the experience of the referee. The three prominent distinctions among the NBA Referees are entry-level referees or rookies, referees for the Women’s National Basketball Association (WNBA), and senior-level referees.

The ability to advance in this career is evident. It takes amassing three to five years of experience officiating games in order to transition from an entry-level referee to a senior-level referee. Out of these distinctions, the WNBA referee salary is the lowest with them earning only around $425 per game. This amounts to just around $180,000 a year. The entry-level NBA ref salary for a rookie in the men’s league is higher at around $600 per game. This comes up to around $250,000 a year.

And then, as expected, the highest salaries are raked in by the senior-level referees who stand to make around $3,500 a game after a few years of experience in the league. This is a whopping salary of $500,000 a year. “>The senior-level NBA referees have an opportunity to make more money by officiating playoff games after the regular season.

This is just the basic NBA referee salary, not counting all the additional perks that an NBA referee may enjoy. Those privileges include all the free game tickets, signed merchandise such as sneakers and first-class traveling to the games. NBA referees also get compensation packages which include excellent retirement plans and medical insurance.

The WNBA has the lowest salaries, unfortunately. This is because the women’s season is significantly shorter and less viewed, subsequently, generating less revenue for the company. This translates to not only a lower salary for WNBA referees but also for the female players in the league. The Women’s NBA teams are just 10 and they only play a 34 game season, hence, the large difference in the NBA referee salary between the men and the women. 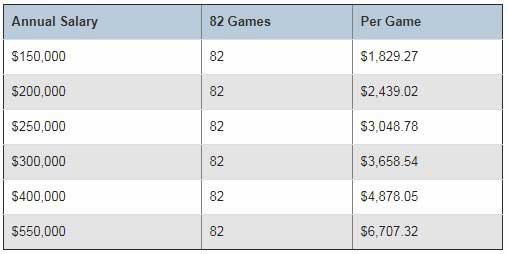 The National Basketball Association (NBA) is the official professional basketball league in North America with 1 team from Canada and 29 teams from the United States, making it a league with a total of 30 teams.

The United States and Canada share four major professional sports leagues and the NBA is one of them. Being one of the most anticipated and highly watched sports in North America, it is able to pay the players around $7-8 million a year, with some of the most successful players making salaries just shy of $50 million a year. With a season comprising 82 games, these players seem to be working hard for their money.

But what about the referees that also play a crucial role in the game? Much like any competitive sport, basketball employs the help of referees on the court to ensure a fair and clean game. Given their vitality to the game, you are probably wondering, “How much do NBA Referees get paid?”

How Much Do Basketball Referees Make? How Much Do NBA Referees Make in the Play-offs?

An NBA season typically begins in October and continues till April with each team facing the rival teams within its own conference three times while teams from opposing conferences face each other twice. Hence, each team plays 82 games. Once this regular season concludes, then the playoffs begin and continue until June. Since 2016, the NBA has held a new format of play-off games which is essentially a best-of-seven elimination round that ultimately decides the winner of the championship. To qualify for the playoffs, the teams have to finish in the top eight of their conference.

A chance to be a referee in the play-off season is an additional opportunity for NBA referees to make money. The play-off games are almost exclusively officiated by senior-level referees. The teams are more prominent and the games are highly anticipated, therefore, the play-off”>

How Much Money Do NBA Referees Make in the Finals?

The playoff season’s Semi-finals and Final games are arguably the most awaited games with incredibly high viewer ratings. Just in 2020, the NBA Finals were watched by an average of 7.5 million viewers. Fans are highly invested and the passion is running high. Any referee called in to mediate a match with such high stakes has to have the competence to match the occasion. The pressure is incredible in games like these for all.

The players, referees and coaches have to be prepared for an incredibly vocal crowd, either applauding or criticizing their every move. The referee, therefore, has to be headstrong and prepared to call the tough shots.

Due to the gravity of the situation, the NBA Finals referee salary can go up to $30,000 a game.

As expected, exactly how much a referee makes depends not only on the importance of the game but also on the referee’s experience and reputation. The highest NBA referee salary was earned by Joseph Crawford right before his recent retirement. With 313 playoff games and 50 NBA Finals under his belt, he holds the record for the most games overseen in the history of the NBA.

How Much Do NBA Officials Make in Comparison With Other Leagues?

The job of a referee is underappreciated yet quite vital, in all competitive sports. The average referee salary is quite consistent and comparable across most major leagues in the United States, including the National Football League (NFL), Major League Baseball (MLB) and the National Hockey League (NHL).

On average, NFL referees make $200,000 a year while NHL referees make $275,000 per annum. The MLB referees draw in $300,000 a year. This matches the average NBA ref salary. Hence, it is evident that there is not a large variation amongst referee salaries regardless of the league they work for.

Officiating several games every year is a daunting task that requires incredible determination and physical endurance, along with profound knowledge of the rule book and a keen eye to pick out the breaking of those rules. It is a job that is often overlooked due to the attention and fanfare surrounding the teams and their players on the court. Nevertheless, the referee’s role in

any game is crucial, and it is therefore important to compensate them generously. A well-paid referee is unlikely to have any scandal surrounding his reputation.

Who is the highest-paid referee in the NBA?

The following are the highest-paid referee in the NBA:

How much do NBA refs make per game?

Do NBA refs get paid per game?

Yes, NBA referees can get paid per game. An NBA referee can make anywhere from $3,000 to $6,100 per game, depending on their seniority.

On what factors do the NBA refs’ salaries depend?

The salary of the NBA refs depends on their seniority.

NBA Referees Salary [How Much Do Referees Make In The NBA]