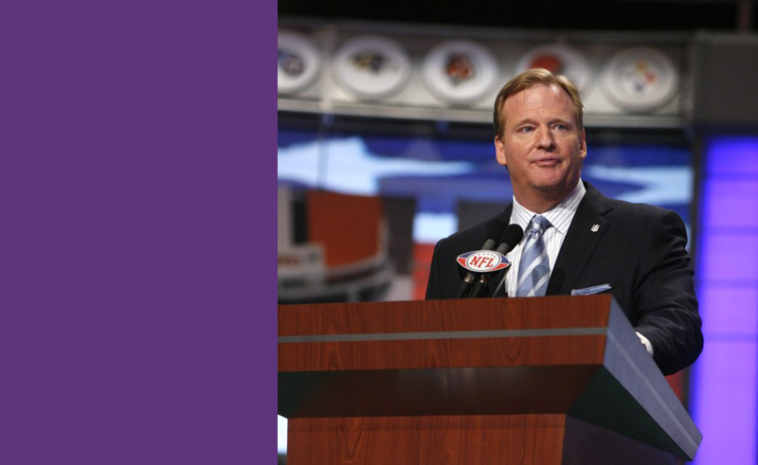 How Much Money Does Roger Goodell Make in a Year?

The NFL commissioner salary for Goodell is reported to be $30 – $50 million a year. This pay of an NFL commissioner includes bonuses as well. According to sources Roger Goodell’s net worth is estimated to be $175 million. He has been an exceptional commissioner throughout this time and has played a vital role in the NFL’s expansion and the league’s success.

According to Forbes, before Goodell took charge of the position in 2006, the average NFL franchise was worth less than $900 million and had profits of $31 million but, now the figures have jumped to $2.5 billion with profits of $101 million and the NFL commissioner salary he took last year was $40 Million. If the league progresses the same way, the NFL’s annual revenue can rise to $25 billion by 2027. Roger is reportedly asking for $50 Million a year and a private jet for life in his contract negotiations.

However, due to the pandemic, Goodell announced that as an NFL commissioner he would reduce his salary to $0. At the manager’s level, there will be a 5% reduction, whereas 7% for the directors, 10% for the vice presidents, 12%, and 15% for the senior vice presidents and executive vice presidents. Goodell has also said that if an employee is earning less than the base salary of $100,000 they will not be affected by the reductions and no employee’s salary will be below $100,000 after reduction. After assessing the current situation, the decision to cut off the salary as an NFL commissioner was a wise one as the effects of the pandemic will be deeper and long-lasting.

What Does NFL Commissioner Do?

Behind the hiring of the perfect coaches who make a team win, the NFL commissioner has a hand as he should identify and select the right coaches for the league and create balanced and equitable teams for the season.

You can think of an NFL commissioner as the owner of any company. Just like a company owner has a responsibility to motivate and teach the managers, the same way a commissioner holds a coach meeting before a season, to explain their responsibilities and obligations to the league. The league commissioner may ask its assistant to notify coaches of different teams regarding their timelines, including scheduling, tournament team selection, and post-season play opportunities.

NFL Commissioners And Their Salaries 2022:

A Little Background of NFL

NFL stands for National Football League and is a major U.S football organization that was previously named as American Professional Football Association (APFA) in 1920. In the 1922 season, it was named as the National Football League. The NFL has its headquarters in New York City. The NFL is considered as North America’s one of the four major professional sports leagues. It is also considered the highest professional level of American football in the world. The NFL comprises an 18-week regular season that starts from early September and ends in early January and each team plays 17 games and has one bye week. All these settings, rules, and drafting of the players are supervised by the commissioner of the league. Under an NFL commissioner, there are multiple tasks to perform, hence an NFL commissioner’s salary is set accordingly.

Who is The Current NFL Commissioner?

Currently, the commissioner for the National Football League is Roger Stokoe Goodell. He is an American businessman who was chosen after the retirement of commissioner Paul Tagliabue in August 2006. Goodell was chosen as commissioner over four other finalists. It was a close call as he was appointed on the fifth ballot before being unanimously approved by acclamation of the owners. Before the beginning of the 2006 NFL season, Goodell took charge as the NFL commissioner. However, the contract got extended as in 2017 NFL announced that Goodell has signed a new contract which would start in 2019. Sports analysts and commentators describe Roger Goodell as “the most powerful man in sports.”

He became a part of the league in 1982 when he joined the league office as an administrative intern. He sent a letter to 28 teams and the league office, securing him the position. He resigned from the NFL in 1983 and joined the New York Jets, but returned next year to take up the job in the public relations department of the NFL.

As the commissioner of the NFL, one big step that Goodell took was to change how NF was represented internationally. After the 2007 season, he shut down the league but set off the start of the NFL International Series in 2007. The first international game took place in Wembley Stadium London where the New York Giants faced the Miami Dolphins in front of a crowd of 81,000 people.

As an NFL commissioner, the pay that Goodell has received in the previous years is worth the tasks that he has to perform throughout the season to meet the standard of the league. As the pandemic has affected other businesses, it was predictable to see its effects on Roger Goodell’s salary and other executives as well.